After getting rather out of synch with my diary because of Easter this is the continuation of my first holiday.
***** 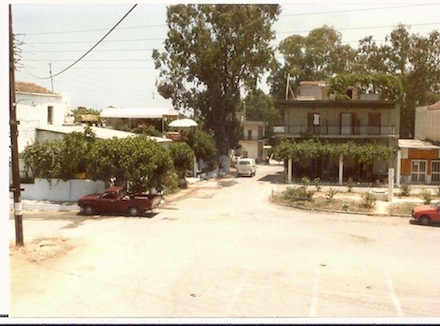 The bamboos towered above us, making a dense thicket in the the swampy ground on each side of the path.
I discovered that to cross to the golden sands we had to wade through an icy cold mountain stream the crystal clear water reaching up to our thighs.
“You forgot to mention this little difficulty.” I grimaced as we picked our way carefully through the pebbles, slipping on the green weeds covering the deepest stones.
“Here’s a good chance to wash our fruit. The water is so icy it will help keep the fruit cool if we leave some water in the bag.” Chris told me, ignoring my grumbles. “It’s half the fun, Brrr. it is freezing though.” she continued with a shudder. Ian was already swilling his fruit, whilst trying not to drop his towel in the water.
The sand, even so early in the day, scorched the bottoms of our feet and we walked along the damp sand at the edge of the water, letting the waves swish coolly up to our ankles. Quickly we found somewhere to put down our towels and, after hanging our plastic bags full of fruit and water on the branch of a nearby tree, which offered welcome shade, plunged quickly into the welcoming blue of the sea. 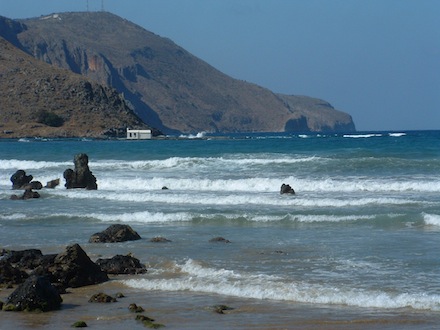 It was bliss, floating on the waves, looking up towards the still snowcapped mountains and the little church up on the hill just outside the village. Too languid and lazy to attempt more than desultory conversation, our day passed in a haze of swimming, dozing and eating cherries and nectarines.
At four o’clock, like all good English folk, we went back to our hotel and brewed an enlivening cup of tea.
“I knew it was worth bringing the mini-kettle.” Chris Said, placing plastic mugs of the enlivening brew on the pristine white, but rather wobbly, table on the balcony. “I could not manage without my afternoon cuppa.”
“And your morning, midday and evening ones.” I rejoined, laughing.
“Just look at that view” Ian returning from his ablutions joined us, rubbing his hair vigorously with one of the rather hard hotel towels, “When you two have stopped gossiping and are ready we can explore the village some more and get something to eat. I’m starving.”
I hurried back to my room and after an invigorating shower, a change of clothes and plugging in a mosquito repellent, we set out once more. It was a walk of about ten minutes up the winding dusty lane from our hotel to the village “plateia”.
The square was looking livelier now with locals going about their business and tourists walking around, peering into shop windows looking for souvenirs and comparing the tavernas, deciding which looked good for the evening meal.
We made for a taverna near the village church called ‘Zorbas’ Chris and Ian had eaten here the previous year and remembered being impressed with the food. We could see a cheerful plump chef in the kitchen and this seemed to bode well for the cooking.
“This was our favourite eating place last year.” Chris told me, then turning to Ian, “Remember that nice waiter? He was so helpful. I wonder if he’s still working here.” They reminisced for a few moments as we negotiated the rather steep stone steps leading down to the taverna through an archway of scented white jasmine.
‘Zorbas’ was surrounded on three sides and overhead by a trellis of vines. Sitting at our table we looked around us, soaking in the peaceful atmosphere, white cloths on the tables, and little lamps suspended over our heads, nestling among the vine leaves, fruit flies battering themselves against the glass.
There was a purposeful bustle in the kitchen. We could see the chef, clad in a clean white overall, tasting something from a large pot, carefully avoiding getting any drips on his luxuriant moustache.
The waiter came over and introduced himself as George. He was tall and thin and had a slightly ingratiating manner, almost bowing as he made himself known. To their great surprise he remembered Chris and Ian from their previous visit and asked after their family. We soon discovered that he was proficient in six languages. So much for our language tapes.
What would we like? The menu was extensive using mainly locally grown produce and concentrating on local dishes many of which were unknown quantities to us.
‘Shall we try the squid?’ ‘What exactly is Stifado?’ ‘How much garlic is in the tzatziki?’
We were well rewarded by our choice of venue. The Stifado was a chunky beef stew cooked with many small, whole onions in a tomato sauce. The squid was fried, crispy outside, chewy inside, delicious with a squeeze of lemon. We also ordered a dish of tzatziki, this yoghourt and cucumber dip came richly flavoured with garlic. A crispy Greek salad topped with Feta cheese and doused liberally with olive oil was placed in the middle of the table. With this and more of the crusty local bread we dined royally. After the first course, as he cleared the plates, George announced, ‘Keep the forks!’ It turned out that we must retain these for the main course; it soon became a familiar refrain whenever we went out to eat. “Keep the forks!”
At the end of the meal George appeared with small glasses of a clear liquid “Raki” he said “good for the digestion”
“I remember this from last time.” Said Ian “Be careful it’s lethal.”
We sipped, we gasped, we gulped glasses of water, Raki turned out to be the local firewater and although I didn’t know it then it would make a regular appearance during our stay on Crete.
“I remember the raki from last year” repeated Ian “I developed quite a taste for it by the end of our holiday.”
“You could have warned me.” I told him, still spluttering, “It’s like paint stripper”
“You’ll get used to it. You are given it everywhere you go.”
“I got quite good at disposing of it in nearby plant pots” laughed Chris.
“What a waste.” Complained Ian
“You drank more than enough!” Chris told him, as she gingerly rose from her chair.
“Ouch! I must remember not to sit on these Cretan chairs when I am wearing shorts .Have I got a pattern on my legs?”
Her rear was sporting the imprint of the weave of the chair as indeed was that of the other tourists rash enough to sit on the chairs unprotected “We could set up a business hiring out cushions by the hour to the tourists.” She said with a grin. “We could set up a little stall in the village square in the evenings
After our meal we wandered back to the plateia, the hub of village life, and chose a pleasant, comfortable cafeteria called ‘Iliovassilema” Sunset, to enjoy an ice-cream and a drink. 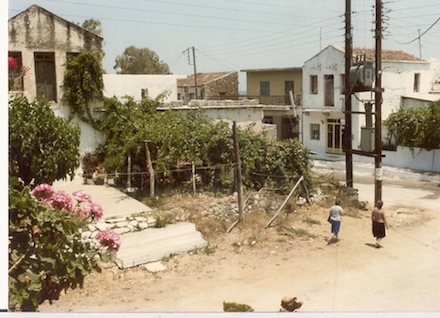 ‘Sunset’ was run by a rather rotund Greek named Pavlos, ably assisted by a good looking man who turned out to be called Kostas. With long black curls and designer stubble he set many a heart aflutter each summer season. We lingered at the table, the chairs being plush with cushions, watching people come and go, sipping our Metaxa, listening to the chattering of the locals and tourists, though we could understand nothing of what was said in the Babel of languages. Tired but content we eventually returned to our hotel to sleep, walking through the velvet darkness of the Cretan night with a panoply of stars twinkling high above our heads, and the sound of owls hooting in the distance.