How did it all begin? Diary excerpt (Part I)

1989
It had all begun three years before in the summer, when my close friend, Christine, and her husband Ian told me about the lovely holiday they had enjoyed in a little seaside village in Crete, and were planning to go again. Would I like to join them? As I had recently been divorced and was on my own for the first time in many years I thought it would be a good opportunity to get away from familiar surroundings and perhaps get a fresh perspective on life in general. Their holiday snaps showed a sunny beach, blue seas and a quiet village surrounded by tall trees. The thought of getting right away from it all was very tempting and I agreed to join them.
“It’s a lovely peaceful place” Chris told me as I handed her back the snap shots they had taken the year before, “You’ll love it. It will give you the chance to relax and the people are so friendly.” 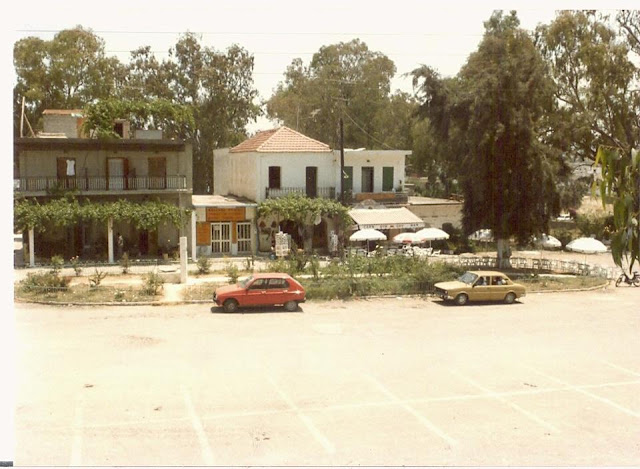 We travelled on a package holiday overnight with a well known company. As we left the aircraft the heat hit us with its full force, even in the early hours. This small airport boasted no air-conditioning and only one small baggage reclaim area. we were met at the entrance by the rep, Manolis. He was tall, dark and tanned with a toothpaste commercial smile. He ushered us onto the coach, checking his list of passengers and destinations. on the coach and settled in our seats the driver pulled away from the airport and joined the exodus of traffic heading towards the east. The sun was rising by now and the sun sparkled of the sea as we followed the coast road. We gazed at the olive groves and little villages perched high in the mountains as they flashed by the windows of the coach, the Greek signposts with their unfamiliar lettering seeming strange.
Manolis, his practiced eye sweeping over his charges, assessed us all at a glance, new travelers, single women, lads here for a good time, families with young children good looking girls, the usual mix of holiday makers.
He began by introducing us to the area and told us a little about the traditions and culture of Crete. This was the home of the Minoan civilization and the myths of the Minotaur and the labyrinth. There had been many invasions over the centuries, including the Turks who had stayed for 400 years, until the revolution in 1866
After making sure we knew when and where the welcome meeting was to be, his chance to sell trips and hire cars, he gave us lots of basic and useful information.
“Please dress respectfully when entering churches so as not to offend the priests. No shorts or bare arms.” His eyes scanned appreciatively over the scantily cad young girls on the back seat. “The little shrines by the side of the road are usually the site of a fatal road accident. On a more mundane note, the water from the taps is safe to drink, but please don’t put paper down the loo, it will block the system, it must be put in the bin provided.”
This seemed very strange to us if not down right unpleasant, but we found that we soon got used to it.
After dropping several passengers off at hotels along the way we eventually arrived at ours. It was a small hotel with scarlet bougainvillea climbing its whitewashed walls and cascading over its balconies. We quickly settled into our adjoining rooms and after unpacking the necessities and freshening up, impatient to see the village, we walked to the village square for breakfast, Chris and Ian reminiscing as we went. 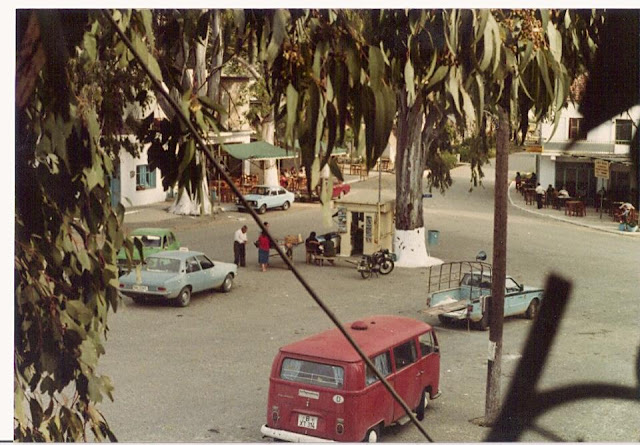 The lane was hot and dusty, and already at 8.30 in the morning the cicadas were keeping up their incessant monotone screeching in the trees, each insect sounding like a dozen, as if the trees were alive with a thousand miniature buzz saws. Ian idly threw a stone into a tree and the noise suddenly came to a halt as the lone insect flew away.
The village square was a surprise to me. It was surrounded by enormous eucalyptus trees. They shaded the edges of the square their branches drooping over the chairs and tables placed outside the cafeterias. In the middle was a kind of kiosk
‘That’s where you buy cigarettes, aspirins and all that sort of thing” Ian told me, ‘but be careful they did me out of my change last time”
“It was probably your mistake” interposed Chris. Unwilling for anything to spoil her vision of paradise. ‘You’re not used to the money”
“Come and see this.” She added to me excitedly, Eager to show me everything she was leading me down a side road with a grin on her face
“What do you think?”
It was a fantastic sight
The road was lined on both sides with magnificent trees, their boughs leaning over towards each other to form a canopy over the road, their whitewashed trunks standing straight as soldiers guarding the thoroughfare.
We walked a little way down
“It’s amazing.” I eventually replied as I stood and gazed down the cool leafy green tunnel
“You didn’t tell me about these trees. It’s like being inside a living cathedral.” 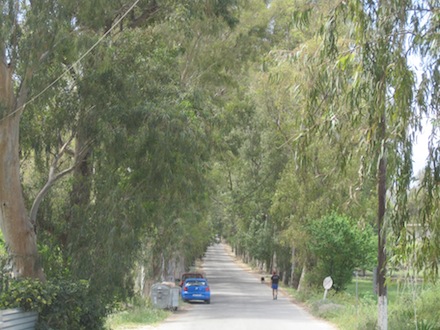 “I thought eucalyptus was an Australian tree” remarked Ian with a twinkle in his eye “I wonder how there came to be so many here in this Greek village. Keep your eyes skinned for Koala bears!”
They showed me a little harbour with its fishing fleet of half a dozen small boats bobbing up and down on the sparkling water, the river running out through a channel to the sea beyond. Ducks waddled along the edge of the water alongside the bobbing boats. There was a little causeway of rough rocks leading out to a small white chapel which we decided to visit before too long had passed. Another road leading off the village square, or ‘plateia’ as I soon learned to call it, was home to an old bakery the walls blackened with age and wood smoke, the bread hot, smoky and delicious. 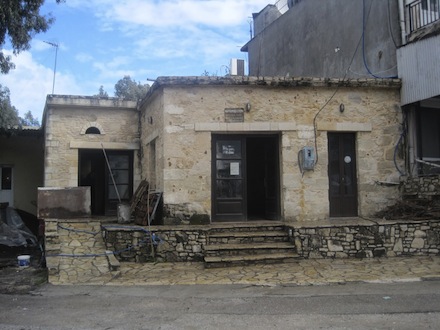 The bakery and it's methods are still there 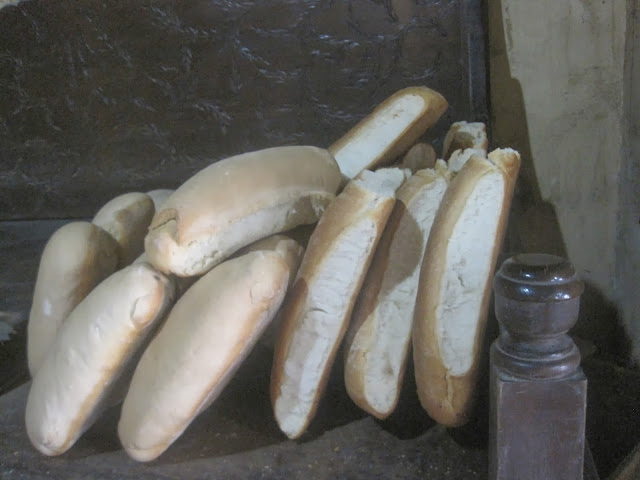 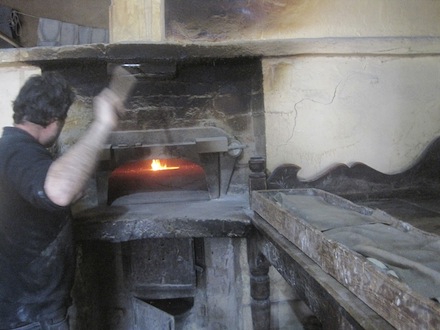 The villagers, we soon realized, also used the bakery to cook their own food as most of them had no ovens and, later in the week, we saw both black clad women and gaily dressed children collecting their steaming trays of roast meat and pies.
Sitting outside a small cafeteria, in the speckled shade of one of the huge trees, we ordered breakfast. Greek yoghourt, thick and creamy, topped with melon, peach, pears and walnuts, drizzled with local honey, golden and sweet, big glasses of freshly squeezed orange juice, and chunks of crusty bread, still warm from the oven.
‘This is the life’ sighed Ian, contentedly finishing off the last crust of bread ‘I shan’t need to eat again till this evening.’
‘And even better’ added Chris ‘we can sit as long as we want and not have to rush off to work.’
‘I must phone home later’ she continued, draining the last drop of her orange juice. “There is a funny little man with the only phone in the village down the road over there.” She gestured vaguely in the direction of the main road. “. He dials the number for you and sits there while you make your call. I don’t know if he understands anything or not. But it’s rather off putting”
After our leisurely breakfast we found our way to the only supermarket; it was small and dark, full of produce that we barely recognized. Herbs and spices piled high next to dark purple aubergines, pale green okra and tumbles of scarlet tomatoes. 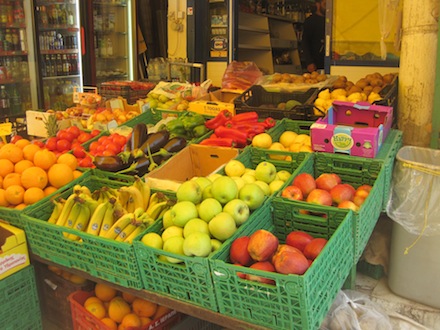 Outside the same shop today 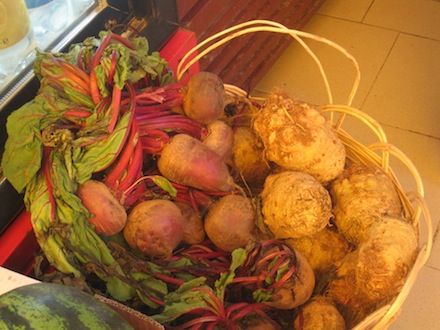 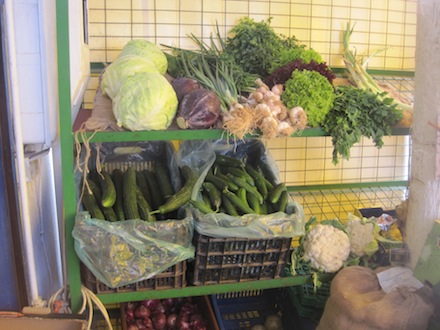 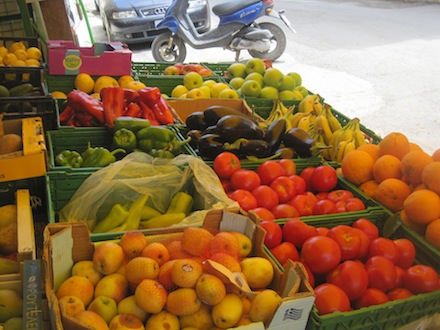 Fumbling with the strange coinage we bought sweet smelling nectarines with the bloom still on them and plump, juicy cherries, freshly picked from the villages nearer the mountains.


We made our way back to our hotel, revelling in the hot sunshine as we walked, a welcome change from the usual grey we were used to in England, quickly we collected up our towels and swimsuits and set out for the main beach which was further down the bamboo surrounded lane..
Posted by Apokoron at 00:10